Cossy Orjiakor Spills More As She Weighs In On HNN's Detention... Talks About How She Became A Pimp 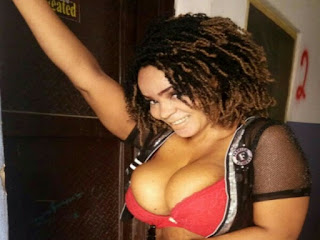 The continuous detention of blogger Kemi Olunloyo has really angered actress Cossy Orjiakor and she might have been pushed to the wall considering what the busty celeb is spilling.


Cossy who weighed heavily on HNN's arrest feels it would have been right if Obasanjo, Jide Kosoko or even former governor Olunloyo had had Kemi locked up...but not a pastor.

In anger or let's say a strong reminisce of her past Cossy describes how her life was almost ruined by pastors when she was merely a starlet finding her way in life.
Her role as a street girl who slept with a dog almost brought her damnation as she was labelled a doomed Jezebel by men of God.
I should have had them all arrested" she said.
In the sane breadth, Cossy stated that the real identity of the Mr. and Iyanu in her book will be revealed soon.
"Do you even know the real identity of Mr?" She asked rhetorically.
She concluded that she will be forced to reveal the identity of the man who turned her to a pimp.
"If they come for me, everyone goes down" she said
La'bos
- April 01, 2017
Email ThisBlogThis!Share to TwitterShare to FacebookShare to Pinterest