I really loved Thin Tall Tony, if he is indeed married, I will deal with him - Bisola 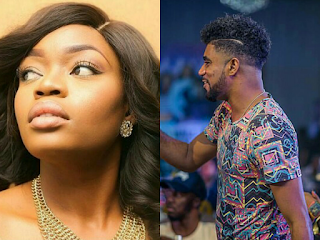 First runner up of the just concluded Big Brother Naija show Bisola has revealed that what she felt for Thin Tall Tony was quite real as she really loved his kind of person and liked the way he made him feel.
Bisola while speaking at the show finale to the host of the show Ebuka said although she was not really thinking of going into a relationship with him, she really felt something for him.

Ebuka reminded Bisola that TTT is married and Bisola in response said she still finds it hard to believe. In response the talented lady said she's waiting to see TTT "if I find a ring on his finger, I'll deal with him" she said and laughed at her own words.

Meanwhile TTT was happily flaunting his ring at the viewing center.
"I still like him" she said talking about Thin Tall Tony.


- April 10, 2017
Email ThisBlogThis!Share to TwitterShare to FacebookShare to Pinterest