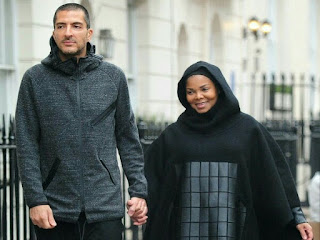 Janet Jackson and her Billionaire husband Wissam Al Mana are reportedly going their separate ways after five years of matrimony based on reasons on incompatibility.
Janet Jackson welcomed her first child earlier this year making her a mother at the age of Fifty only for the couple to file for a divorce  three months later.

New reports however have claimed that Janet Jackson might be the Queen of divorce and also a 'gold digger' as the singer allegedly waited for five years in the marriage and even changed her ways for her Muslim husband.

According to the reports, Janet Jackson had signed a prenup that entitled her to $500Million if she waited for five years in the marriage.
Not only did Jackson wait for five years, she waited for two months extra before filing for a divorce on basis of incompatibility.

Wissam Al Mana was Janet Jackson's third husband. Janet will be $500Million richer when the final divorce papers have been signed.

- April 10, 2017
Email ThisBlogThis!Share to TwitterShare to FacebookShare to Pinterest