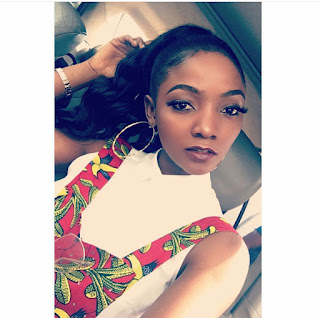 Could this be the big reveal we have been waiting for? Today being singer Simi's birthday, her colleague and friend Adekunle Gold has revealed that his popular song Orente was actually written for Simi.
Adekunle Gold made this reveal after a Twitter user asked Simi if she was the inspiration behind the Orente lyrics, Adekunle replied the tweet with four words "I WROTE it for her" implying that he wrote the song for Simi.
Lets refresh our memories again; the song Orente talks about a simple lady who would rather have love than wealth, a lady who would stand by her simple and poor boyfriend despite the pressure from big happening guys... Is Simi Adekunle Gold's Orente?
This morning Simi revealed all her names Simisola, Bolatito, Adeola, Opeyemi, Oreoluwa, Ogunleye.
If you are very conversant with this song, you will remember that Adekunle mentioned three of these names in the song.
Does this mean that our quest is over and we have found Simi's boyfriend since Falz says he isn't the one?
La'bos
- April 19, 2017
Email ThisBlogThis!Share to TwitterShare to FacebookShare to Pinterest