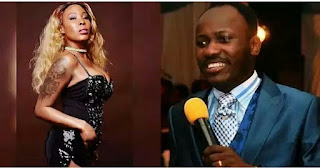 We already said it that it is far from over between Apostle Johnson Suleman and his alleged mistress Stephanie Otobo, as for Stephanie, out of sight is not out of mind, she has a score to settle with the cleric.


The Canadian based singer who has returned to her base revealed in her last video that she would not forgive the happily married man of God for humiliating her mother and taking advantage of her low status.
Stephanie obviously meant every word.
At the beginning of the mess, there were some screenshots of facetime chats between Stephanie and Suleman. However, many claimed the screenshots were photo shopped.
The young lady today released a video clip of her scrolling through her phone as she displayed what she calls the original chats straight from her phone.

APPARENTLY WE HAVE NOT SEEN THE END OF #STEPHANIEOTOBO AND #APOSTLESULEMAN STEPHANIE RELEASES THE ORIGINAL CHAT WITH APOSTLE SULEMAN WITH TIME AND DATES. #GOLDMYNETV
A POST SHARED BY GOLDMYNETV (@GOLDMYNETV) ON APR 3, 2017 AT 7:06AM PDT

The chats on her phone had dates and time and looks more implicating for the cleric.
Note that apostle Suleman patiently await a the day Stephanie would make a video confessing she lied...this doesn't look like it.
La'bos
- April 03, 2017
Email ThisBlogThis!Share to TwitterShare to FacebookShare to Pinterest