Wow! And It's Another Baby Girl For Davido! 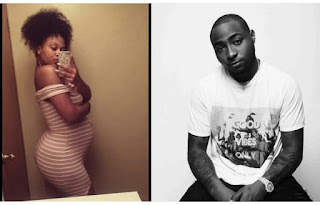 Even little baby girls in heaven have heard that Davido can be a very loving and doting dad to the children he loves and accepts... For this reason, another baby girl is smartly about to bear the famous Adeleke name through Amanda and Davido.
The singer has revealed in a state of anger that his unborn child is female...unwittingly disclosing what was before now a secret.
Davido was pushed to making the statement while trying to clapback at a troll who called him a spoilt child who grew on the wings of daddy's money.

Angrily Davido had retorted that the troll had sense that was below his unborn daughter's. He replied that even his unborn daughter had more sense than the troll.
Except there is another baby mama on the way apart from Amanda who is heavily pregnant, then it is another girl for singer Davido and his baby mama to be Amanda.
Imade is about to have a playmate and all things being equal, the unconfirmed Veronica might be their biggest sister (IF...)
La'bos