It is not over; See Oba Akiolu's reaction to the Ooni of Ife at Obasanjo's son's wedding. 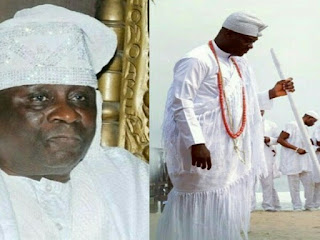 The issue between two of Yoruba's greatest monarchs the Ooni of Ife and OBA Akiolu of Lagos might be far from over if the new footage from the marriage of former President Obasanjo's son over the weekend is anything to go by.

Oba Akiolu and the Ooni were among the he dignitaries who graced the colorful event with the heir royal presence and it seems it was their first encounter since the public snubbing incidence.

The highlight of their meeting happened when Royal fathers were called upon for photographs with the couple, as expected, all eyes were on the two Kings. All cameras were focused on them waiting to capture whatever would pass on between them.

In his usual humble way, the Ooni if Ife was amongst the first royals to rise and wait for the others to join.
Interestingly, King Akiolu mounted the stage and outrightly looked away, the Ooni of Ife who was standing by his wife only smiled and shrugged it off.

#OoniofIfe and #ObaOfLagos meet publicly for the first time after the 'SNUB" . Both Obas had slight contact again at Obasanjo's son and Adebutu daughter's wedding over the weekend. . However, the monarchs maturely avoided greeting and contact. Even the Photographers/ Cameramen kept an eye on the situation . #GoldMyneTV
A post shared by GoldMyneTV (@goldmynetv) on May 15, 2017 at 11:03pm PDT

People are bound to say the Oba of Lagos was not warned enough especially after the fire incidence at his residence.
This time, there was no 'inu mi, inu e' greeting! Or did we miss it?
La'bos

That your Lagos oba is very rude and mannerless. Agbaya ni won fa.