Meet the Mercy Aigbe gang, the dynamic people who saw her through the ordeal! 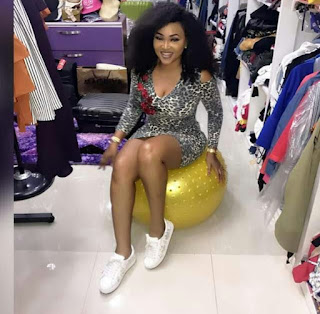 The storm seems to be finally over for Nollywood actress Mercy Aigbe weeks after the tragic end of her seven years marriage to her Hotelier husband Lanre Gentry.
Mercy who is back fully on Instagram posting pictures from her new location has shown women that moving on from a painful relationship is not that difficult especially if you have the wherewithal to do so.

The mother of two is obviously out of danger although she has not told us if the recommended surgery for her left eye has been carried out.

In her latest post, the actress took out time to appreciate all the people who saw her through the terrible ordeal.
The list included names of some of her colleagues, her close friends and some of her team members.

Not surprisingly, Toyin Abraham made the list. The actress had recently revealed in an interview that she loves reaching out to women going through emotional distress and that was why she reached out to Mercy.
Surprisingly, actress Omoni Oboli made the vote of thanks list.

Mercy also acknowledged her clam team; her stylist and her make up artiste, whom according to her are more like family to her now.

Then her friends and her publicist!
Yes! The storm is over but Daddy J is still threatening to spill. Is this really over?

Aproko Labos its up to you to feed us oo. Lol