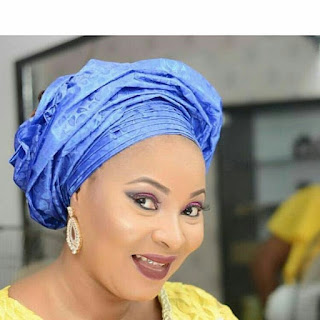 Barely two months after welcoming her second child in Canada, ace actress Moji Olaiya has passed on. This is coming in the wake of the death of two thespians in the industry Olumide Bakare and Pastor Ajidara.

In March, the very popular Yoruba actress, Moji Olaiya welcomed her second child In Canada  few months after she officially divorced her first husband  Okeshola to marry another man. The 42-year-old Nollywood star delivered a baby girl.
Sources claim she might be buried in Canada as her aged mother lives in Nigeria and its a taboo in Yoruba land to see the corpse of one’s child.
"However, it is with utterly sad hearts that we announce that the daughter of highlife music legend, Victor Olaiya passed away in a hospital in Canada. It was said that her cause of death could be linked to complications that stemmed from her child birth in March. It is also possible that the actress would be buried in Canada where she passed on."
Moji’s first marriage to Okeshola fell apart years ago due to the fact that her husband was not showing the live he promised to her first child who is now a teenager.
The Yoruba actress decided to give love another when when she sealed her new union months ago at a quite ceremony and welcomed her second daughter later.
This is another big blow to Nollywood.
La'bos
- May 18, 2017
Email ThisBlogThis!Share to TwitterShare to FacebookShare to Pinterest