See how Davido's first baby mama Sophia staked her claim on the singer... 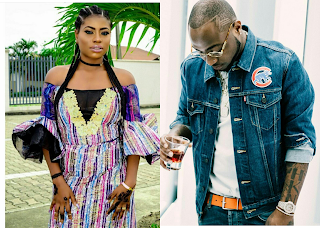 Davido's first official baby mana, Sophia Momodu might not be saying anything directly to the media but she sure knows her place in the heart and life of the father of her child.
The mother of one stylishly stakes her claim on the singer while wishing her daughter a happy second birthday on Sunday.
Davido who recently welcomed his second official daughter in Atlanta had mentioned that Hailey his new daughter was his carbon copy even at a day old.

Well, Sophia would not just let this slide. She quickly made it known in a classy way that her daughter Imade was also her daddy's copy.
In her birthday post, she stated that she had always wondered where Imade got her goofy smiles for until she saw her father's baby photos...

Now we know that Sophia has gone through the family album. Something Amanda has probably not been privileged to do.

Davido might have legion of Baby mamas, but Sophia sure knows her place.
La'bos

Yahoo for boys and baby mama for girls...industry gba ni.