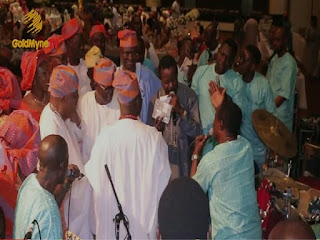 Saying that the wedding ceremony between the daughter of Adebutu Kessington and Chief Olusegun Obasanjo was a money affair would be stating the obvious.
Chief Adebutu Kessington popularly known as Baba Ijebu is one of the wealthiest men in the South West and this fact came to light when his daughter Temitope Adebutu married the son of Nigeria's former president Olusegun Obasanjo!

It was indeed a money affair. King Sunny Ade was on hand to thrill the guests to melodious music and the two fathers of the day displayed their 'money spraying' skills in ways that would shock even e-money!
Want to see how they did it?
See the video below...


https://www.youtube.com/watch?v=hX9rNJS0nDI&t=64s
- May 17, 2017
Email ThisBlogThis!Share to TwitterShare to FacebookShare to Pinterest