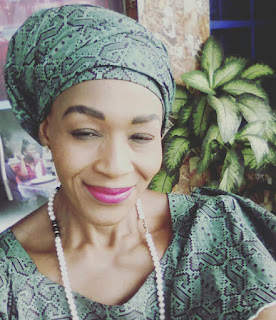 If three months in a maximum prison does not humble you, nothing else can; this is exactly the case of controversial blogger and self acclaimed international journalist Kemi Omololu Olunloyo.

The 52 year old Kemi has witnessed so much drama and unrest since her case of defamation started on March 14 over three months ago.
Before her arrest and detention, Olunloyo had never really swerved towards religion in her day to day activities. Although she made it clear that she was a Christian, she also referred to herself as God, invoking the anger of many.

She faulted and condemned all clerics... Today however, especially since her release Olunloyo speaks a different language. Not only dies she now to devotionals on her social media pages in place of her controversial posts.
This morning, Olunloyo actually called on the God who saved Daniel from the Lion's den to save her from the jaws of the powerful ones.

Olunloyo who had initially spent 81 days in prison had been rearrested and made to sleep another night in prison.
Although she's been released, her case persists and as she rightly guessed or knows now, only the God of Daniel can I deed save her!

La'bos
- June 23, 2017
Email ThisBlogThis!Share to TwitterShare to FacebookShare to Pinterest