One Fateful Night In Calabar... 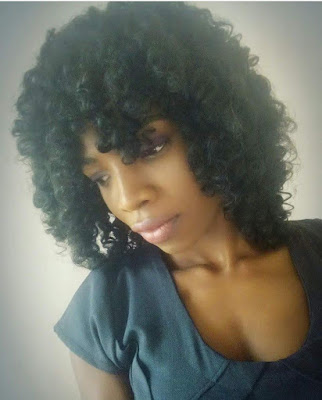 Date: July 7 2011…
Place: Cross River, Calabar.
Time: 1:30am till dawn.
Remarks: A night filled with terror transitioning into a day filled with fear and laughter… A night I will never forget!


Somehow, in the year 2011, I was flung to Calabar Cross River states by fate to stay with an older friend for a while. I got to Calabar on the 2nd of July, and in no time I had adapted to my new environment.
My friend was nice, she did everything to make me comfortable and ‘happy’, we were going out, doing all the suya and pepper soup things, her rich friends were dropping in and it was fun unlimited as they were all ‘loaded’.
So, one fateful night, 7th of July, we went overboard with the fun and we paid the price… Well, we did!
At about 10pm that night, we had a guest, a serving House of Rep member, who came to say ‘Hi’ to us. Prior to his arrival, we decided to put a bottle of champagne in the Ice Bucket while waiting for him.
I do not drink, I am a poor drinker…a pitiful drinker, feed me red wine with a baby spoon and I’d be useless for the rest of the day!
Same goes with my friend, but she was better, could safely drink a little quantity of wine if need be.
The Honorable arrived… We served him the wine and to make him feel at home, my friend suggested we drank some wine too… I got the cups and the wine was poured! I sipped… She gulped!
Our guest left with his entourage around 12:am, by then, my friend and I were useless! We couldn’t see him off… He left.
The last person to leave the building… The gate was left unlocked! Nobody was aware, the two drunkards had gone to sleep… We managed to have our bath and change into our night shirts!
We slept.
“They were masquerades, they were flashing their torch light and making horrible sounds. Then they began to shout, banging on the door… I was scared, I was sweating…”
I opened my eyes and was glad I had been dreaming, I reached for my phone, it was 1:30am and at that moment, I saw a light flashing continuously by our bedroom window. Then I heard voices…
Deep male voices, I heard someone begging in another part of the building, I became alert immediately. My friend was still snoring lightly, I quickly switched off the light and woke her up!
Robbers! Thieves! They were in the house… My greatest fear on earth.
Swiftly, my friend reached for her trinket box and flung it under the bed, shoved her BB phone somewhere and left her Nokia on the bed with her wallet.
I was shaking, no, I was dancing… My body had become someone else’s, I couldn’t control it’s movement, my teeth were chattering I could hear the sound, my friend had to beg me to stop shaking! I was wheezing too, in fact I was so close to having a seizure!
We laid flat on the floor… They were already in the flat closest to ours!
Suddenly, I remembered how I was dressed… A flimsy night shirt that barely covered… Without standing up, I reached for my friend’s oversized jean and threw myself into it, reached for another clothe and it turned out to be a ‘Buba’ I wore it, without removing the shirt and continued the ritual of dancing and gnashing of teeth!
I was reciting poems and psalms until I heard the first bang… “Open this door”!!!
Sharply my mind flew to a Wednesday night in 1994, my first encounter with armed robbers, clearly etched in memory.
“Open this door” they had screamed that night and without waiting for a response, they had broken the door and marched in with rifles and cutlasses, stepping on my dad who had laid flat and slapping my mom, who was begging them!…
“Open this door” I heard again and my mind returned to Calabar… “1.2.3…” someone threw a kick at the door, another came to the window with a green light…
I died, resurrected, died again… My friend made no sound but my heartbeat was screaming and making so much noise! No doubt they heard.
Alas! Our door was unbreakable… I didn’t know when they stopped kicking or banging or when they left the building but my friend and I didn’t rise from our position till 8am that morning!
It was the Landlord who successfully called from the window assuring us they had left… I woke my friend who had slept since 3:30am. I never blinked.
….
They robbed all the flats but ours and the Landlords… We had iron doors!
…
“They no lock that gate, no who enter last yesterday night?” the landlord asked saying he saw them as they marched into the compound without a barrier.
Everyone denied, my friend and I also denied… 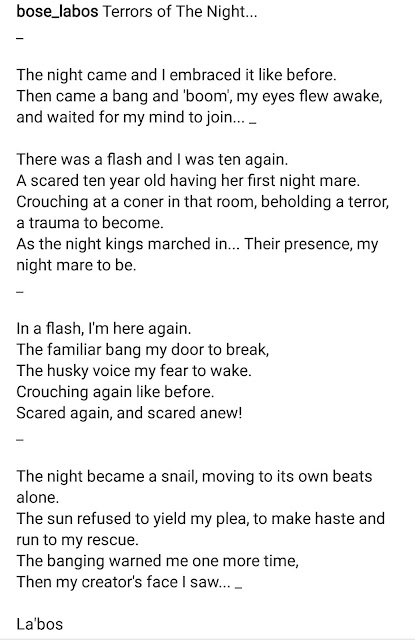 - April 30, 2018
Email ThisBlogThis!Share to TwitterShare to FacebookShare to Pinterest