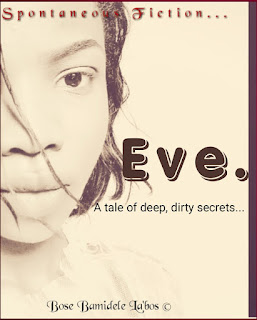 It was almost 6am.
The dream had scared her awake.
She was going to cry. She knew it, she could feel it already. The veins around her face were ready for the task. Her tear glands ready too, she could literally feel her body getting ready to join even if it was just to heave.


These days, she cried a lot and it bothered her. It bothered her so much, not because it was a sign of weakness which was not her trait but more because she couldn't understand the reason she cried.

The first feeling would be a feeling of void, an indescribable emptiness and a desire to grasp something far out of her reach, she would struggle with it but without success, the resultant effect would be tears.

The tears flowed now, this time, Eve was angry with herself. She glanced at her sleeping 6 year old daughter and weeped profusely.
"What is wrong with me!" she wailed, not afraid to wake Eno.
"Why am I crying? Why do I feel blank?" she continued to cry.

Sated now. Tears dry. Eve reached for her phone, Eno stirred but slept on.
With a blank face, Eve unlocked the phone. It was time already.
She rose from the bed and began her daily ritual which included preparing her daughter for school.

Eve had dropped Eno off, she was walking back home and suddenly she felt agitated and uneasy. Not just because she was going to walk by the man's house. Yes, the man made her uneasy with his lusty looks and dirty advances, something else made her uneasy.

She slowed her pace just as her phone rang.
She rejected the call and continued to walk slowly.

He was there.
The look was different.
Yes. That was the point.
These days, he looked at her like he knew her. Like he knew every inch of her body and there was nothing more to see, like they share a dirty deep secret.

The smile on his face was dirty.
Eve did not look away. She was just a few feet away. He did not move.
Eve's head whirled, her eyes rolled, she felt dizzy. She saw herself in his arms, their bodies entwined...
It was a feeling of Deja Vu... They were in a bedroom alien to her... The beauty and the beast. Everything was blurry.

She was face to face with him now... Her heartbeat raced. He was smiling sheepishly, then he winked.
"O ni Ki mi ni?" (Won't you greet me?)

Eve walked away.
Two weeks ago, on this spot, she had vomitted...

She began to run...her head was not hers. Something was wrong. She was seeing images. She had to run, to clear her head.
As she ran, tears flowed, she did not stop.

"He is evil" Eve cried, running like a gazelle all the way to the house...